Bitch in a Lexus SUV

I drive a Lexus SUV.  Fancy, right?  Not really.  My husband is in the car business, it came in to his dealership as a trade, and we were able to buy it for a good price.  It’s a great sturdy dependable vehicle, and it’s comfortable on the inside.  It has nav, leather, a backup camera, and a rear DVD player.  HOWEVER… It’s nine years old.  The windshield is cracked, the dash is cracking, and there’s a slightly crumpled bumper where I might’ve backed into a Jeep.  Or a concrete pole.  Okay, both.  The rear DVD player won’t eject the Leave it to Beaver disc that’s been in there for several years now, so the Beav is the only thing the kids can watch.

The inside is messy (and a little crusty, because kids are gross).  We’ve taken it all over on trips – camping, mountain biking, off-roading – and we’ve had it through baseball, martial arts, and football practices (and the stink and dirt those activities bring into the car after). 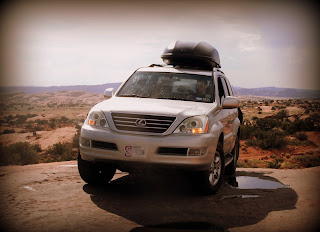 I’m not one of those people.  This car has always caused me a bit of anxiety, truth be told.  Driving up in a Lexus tends to change peoples’ perspective of you.  Sometimes it’s subtle (Nice car) and other times not so much (What are you doing living in our neighborhood with a fancy car like this?? asked one neighbor.  And we don’t live in the hood, y’all).

I am not my car.  I’m not fancy and pretentious and worried about status.  I’m down to earth and approachable and easy to get to know.  So, I’ve always had reservations about people seeing my car before they know me.  I don’t like people to assume things about me because I drive a Lexus.
I’ve found myself, more than once, apologizing for my car: Oh, it’s old, we got it on trade, we’re not fancy, blah, blah…

Am I trying to put myself at ease or them?  I’m not sure.

While browsing through my News Feed, I saw a post by one of my favorite bloggers.  She wrote:

This morning's commute has strengthened my growing suspicion that "bitch in a Lexus SUV" is redundant.


I don't mean to call her out, because I think she's super fantastic.  She makes me smile all the time.  But...

Ouch.  See, this is what I always worry about.  It seems I was right all along; I’m being silently judged every time I leave my driveway.  Great.

Of course, the author of said post quickly issued a disclaimer that she was excluding her loyal following from said label.  But the subsequent comments made me cringe even more.  Comments included:

that's because she's trying to be like the woman in the BMW SUV, but she doesn't have the money to do it, so she just has to act bitchy-er

Is it possible to own a Lexus and NOT be a douchenozzle?

Don't you know, rules don't apply to BMW, Lexus, and Audi owners. It's in the fine print when they sign the lease.


Douchnozzle?  Really?  Sigh.  So, now I feel like I need to put more bumper stickers on my already stickered up Lexus so that she’ll be all incognito.

Folks, I can assure you that the same things are going on in this Lexus as in your car, whatever you’re driving.  If you’re out and about and you see my Lexus SUV, remember:

The bitch driving may or may not have had time to shower yet today.  Odds are, she’s probably running late for something.  Behind those big trendy sunglasses, she might be hiding tired swollen eyes that could use a little make up she didn’t have time to apply.

If she’s on her phone, she might be trying to arrange carpool or make a doctor’s appointment.  If she cuts you off, it might be because her spawn are fighting in the back seat and distracting the hell out of her.

If she almost turns out in front of you or doesn’t go when the light turns red, it might be because one of her kids said Look, Mom and her instinct to respond to her child takes her eyes off the road even though she’s told them time and again not to blurt, Look, Mom when she’s driving.

Rest assured she’s not worried about appearances or status; she’s just thankful that she was able to buy such a comfortable and dependable car 6 years ago, because when the economy went to shit 2 years later she at least didn’t have to worry about needing a new car any time soon.

She’s probably only worried about getting where she’s going without running out of gas, because she forgot her tank was almost empty, and she’s stressing how much said tank costs to fill up.

She’s just like you in all the ways that count, so cut her some slack; she doesn’t pay any attention to the fancy ‘L’s on her car, and neither should you.