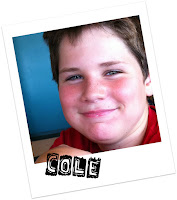 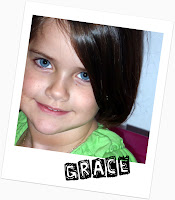 Danny: I always clean up after myself when I'm done in the kitchen.
Me: Oh, okay.  I'll take pictures next time I have to clean up after you clean up.
Cole: Dad, can you iron my shirt?
Danny: Sure. [walks away from sink with water running]
Me: Were you done at the sink, honey?
Danny: Oh, sorry.  Yeah.  Can you get it?
Cole: Yep, always cleaning up after himself, isn't he??

Cole: Who are you voting for?
Me: None of those people (story about Rep. debate)
Cole: I'm voting for Romney.
Me: Why Romney?
Cole: Because he's the best looking and youngest, so he'll probably last longer.
Me: I think Obama's probably younger.
Cole: Wait, what are we voting for again??

Grace: Mom, what's 7 Minutes in Heaven? Is that where you hold your breath and pass out for 7 minutes?
Me: No.
Grace: Moooom... What is it? What was she talking about on the show when she said that?
Me: It's a kissing game. A boy and a girl go in a closet or something and kiss for 7 minutes.
Cole: I'm definitely playing that game!
Grace: Have you played that game, Mom?
Me: Nope. I don't kiss boys.
Grace: Well I do!

Grace: What's for breakfast? [It's 11:30]
Me: I was gonna make some eggs. As soon as I stop sneezing.
Grace: What about cereal? Yeah, I'll go with cereal. I don't really want you sneezing in my breakfast. No offense.

Grace: He's a psychotic freak, I knew it.  I KNEW he was an alien.
Cole: Grace, psychotic means mental.
Grace: I don't care, I just want you to be an alien.
Cole: Why?
Grace: Because then you would come in peace.
Cole: [robotic voice] I am an alien. I come in pieces...

Danny: they call that a 4-door coupe.
Me: isn't that an oxymoron?
Grace: Cole is.

Me: If you don't get in the shower now, I'm going to do the dishes and you're not going to have any hot water.
Cole: Wait... We have a limited amount of hot water? 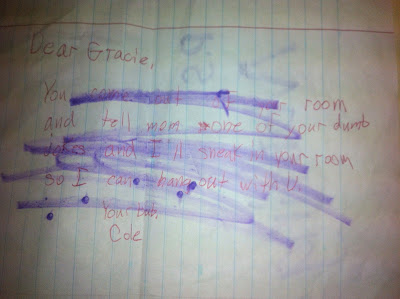 
Cole: Can we please go have breakfast first, I'm starving! [It's only 8am]
Grace: Uh, no Cole.  Kids in Africa are starving.


Me: Something smells really bad in here.
Grace: I'm sure it's Cole.


Grace: These chips taste like puke.
Me: Then stop eating them! [Because they're mine. Can't something just be mine??]
Grace: They're so good, though.


Cole: Mom, do I look awesome?
Me: What did I tell you about that earlier? Don't boast like that. It's very off putting.
Cole: What does that mean?
Danny: It means people won't want to be around you.
Cole: Aw. But I'm so enjoyable.
Grace: Uh, no. You're not.


Grace: Cole, fake crying doesn't work. Well, it works for me. Not for you, though.


Me: Grace, Poppy's on facebook now, isn't that exciting?? ;-)
Grace: Yeah, now you get to see all mom's posts where she makes fun of us.


Cole: Where are we going?
Me: Grace needs school shirts.
Cole: Can I get something.
Me: No.
Cole: What store?
Me: I was going to try Kohl's.
Cole: Huh?? We're going to MY store and I can't even have anything??? Harsh.


[conversation overheard in the car]
Grace: Meanie Weenie!
Cole: Ha. You said weenie. {and he's never even seen Beavis and Butthead}
Grace: So? It could be a hot dog weenie.
Cole: That's not the kind I was thinking of.
Grace: I know what kind you were thinking of. The inappropriate kind.


Awkward moment of the evening, brought to you by Grace Durdin:
Cole: Curse you, Perry the Platypus! (Phineas and Ferb, anyone?)
Grace: Curse you, Mommy the Humanpuss!
[3 of us sit in momentary horror and then die laughing]
Grace: What?? Why are y'all laughing? What did I say?
Cole: I don't know, but I know it's bad.


Grace: Why did you keep our umbilical cords? That's gross.
Me: Why is it gross?
Grace: It was inside you, and it came out with me through your booty.
Me: I don't think that's where you came out.
Cole: It was her vagina.
Grace: I don't think boys should say that word. It's inappropriate.
Cole: Vagina vagina
Grace: Stop it! Do girls go around saying penis penis penis??
Cole: Some of them do.


Grace: Cole, you shouldn't say rude things to me, because when you do that insults Mom, too.
Cole: How?
Grace: Because she made me.
Me: That's true. So that means you shouldn't say anything bad about him either, right?
Grace: I don't!
Me: Grace...seriously?
Grace: Okay, I did. But I stopped yesterday. :-)


Grace: ChooChoo [Chihuahua] was in bed with me, but he keeps hugging my legs and my arms and doing something with his booty...


Grace: Are Camelbaks just for biking?
Cole: No, they can be for hiking or anything really.
Grace: Anything? what if you're on a pirate ship??


Cole: God, Grace... you're so bossy. When did you become my mother?
Grace: Yesterday. [Beatles song of the same name playing in the background.]


Me: What did you just say?
Grace: Dicks.
Me: Um, why?
Grace: I was talking to the cat. It's her nickname. I call them Trix and Dix. [Their names are Trixie and Dixie]
Me: Ummm... No, lets not call them that.
Grace: Why not?
Me: You're just gonna have to trust me on this one.


Grace: Mom, our bathroom smells like a stinky frog AGAIN.
Me: Really? And what does a frog smell like?
Grace: STINKY. Duh :-)


Yesterday's Quote of the Day (aka Why Homeschooling is a Good Idea):
Grace: Mom, what's a hobknocker?
Me: I don't know.
Grace: I think I do.
Me: Okay... Grace, what's a hobknocker?
Grace: It's a little man that has sex with baby animals.
Me: What?! [horrified]
Grace: Yeah, that's what my friend at school told me.


Bedtime...
Me: **impatient and exasperated, headache and cranky**
G: Mom, you're so beautiful.
Me: Not me...I'm mean and cranky tonight, not beautiful.
G: I know you're cranky, but you ARE beautiful.
Me: I love you, sweet child.
G: I love you too. Thanks for laying down with me. You and Daddy hardly ever lay down with me anymore. And when you don't, it's like there's no rain, and it makes a fire in my heart.


Me: I used to come home after school by myself in middle school and just read or watch TV until my mom got home.
Grace: Did she tell you the unlock code for the TV? Wait a minute... I thought there was no TV back then, Mom!


Grace: Mom, Cole had two iPods at rehearsal, and both got taken away. It's like a math problem... If Cole has two iPods, and two get taken away, how many iPods does Cole have left?? Hahahahahaha!


Me: Take your clothes off but leave your unders on when you try on the swimsuit, Grace.
Grace: I know mom. That would be gross. And disturbing.


Watching the beginning of Ghostbusters 2:
"When there's somethin' strange in the neighborhood, who you gonna call?" [kids at birthday party] "He Man!"
Cole: Mom, who's He Man??
So, I felt duty bound to find He Man on youTube. After watching a clip, Cole was not impressed. "Cheesy," he proclaimed. "Let's watch Ghostbusters."


Grace: My teacher said the road might be frozen in the morning because it's going to be 22, and it only had to be 32 to freeze.
Me: Do you want the road to be frozen?
Grace: Well, no. But I like popsicles.


Me: Grace, Izzie is watching you eat and looks sad. I bet she's wondering why you don't drop as much food on the floor anymore.
Grace: Because nothing is yucky. :-)