I was going to sit down and write this evening about other things.  I vaguely remember them, and maybe I'll write about those things later.  Right now I feel like I need to write about defeat.  Because that's what I'm feeling.

I have this child... He has always been more everything than other kids.  I've always felt like I have to struggle to stay one step ahead of his needs, and he's fought me every step of the way.  He looks to everyone else like a normal 10 year old boy, and others often just shake their heads and say, "Oh, he's just being a boy, Mom."

Bullshit.  I knew by the time he was four that he wasn't just being a boy.  I'd been around other little boys.

At first, he seems like an outgoing sweet kid.  He's funny, too, even if he does try just a little too hard.  But if you spend a significant amount of time with him, you find yourself thinking he's maybe more of pain in the ass than you thought.  Then you spend a little more time with him, and you start thinking, Okay, what's wrong with this kid?

He's bipolar.  He has ADHD.  He has Oppositional Defiant Disorder.  He's ten, going on 15, which is bad enough in itself.  He can't handle sugar; it makes him throw up.  He can't handle wheat; it affects his health and his behavior, and, recently, it was probably the culprit in an otherwise unexplainable bout of eczema.

We have spent thousands of dollars on therapists, doctors, prescription medication, supplements, and a modified diet to give this child the best possible chance at success.  But you know what?  We're just tilting at windmills.  Because what do you get when you have a child with a laundry list of diagnoses, very poor impulse control, and food sensitivities?  An impossible situation, that's what.  He wants to eat what he wants to eat.  The end.

You might be able to monitor what goes in their mouths at 2 or 3 years old.  But at 10?  The kid has to be on board.  You can't monitor everything that goes into a 10-year-old's mouth.  You can buy special food, make healthy lunches, teach him good choices... But you can't stop him from buying another lunch in the cafeteria.  You can't be in the kitchen every second that he is.  He has to be on your side...no, he has to be on his own goddamned side.

But what if he's not?

What if you offer him everything you can, every chance to be healthy and happy, and he just continues to throw it back in your face?  He's 10, not 20.  It's still your job to parent him, no matter how hard he makes it, right??

We can't have a typical family movie night with pizza and movie, because we can't have pizza.  No, he can't have pizza, so we all comply to make him feel less different.  Every now and then, I make homemade pizza, and it's a special treat, because my pizzas are good.  They're awesome.  And I buy $12 gluten free crust so that he can have awesome homemade pizza.  The rest of us usually eat GF, too, but this time we had regular crust.  So, we all sat down earlier tonight to eat pizza and watch Ferris Bueller's Day Off.

A lovely family evening went to shit when I started cleaning up and realized that there was less leftover pizza than there should have been.  The boy had eaten the glutenous pizza.

The effort to have a special GF pizza treat?  Out the window.  Could've called Domino's and saved time and effort.  I wanted to smash things.  I started slamming dishes and cabinets.  Then, suddenly I was sobbing.  This hopeless sense of futility and defeat took me over, and I lost it.

This was by no means the first time.  There have been many instances, and each time I think he's learned a lesson and then wham!  He hasn't.

After I was done sobbing out my frustration and snot all over my husband, I went and told my beloved son, my first born, the child that I carried for nine months and then nursed for three years, that I was done.  That I was feeling defeat and sadness and that I didn't know how to be his mother anymore because obviously I wasn't doing it right.

Did I mean it?  In the moment, I absolutely did.  But... no matter how hard this child makes it on us, I'm sure I don't really have it in me to wave the white flag for good.  The hell of it is, I will keep trying, even if it's just tilting at windmills. Because I don't know how else to do it, this Mom Thing.

Where do I turn in my Mother card??  Or maybe I can just find a good boarding school...

Wine may not be enough tonight.

So, the girl child comes home from school in full on crazy mode today, having a meltdown every 3.7 seconds.  I attempt to work for a while longer, though I am constantly being harassed by this strange replica of my offspring.

No, I will not take you to your grandmother's.
No, you cannot go out and play.
No, your room is not clean (and yes, you have to clean it).

The boy child gets home and raids the cabinets, wreaking his usual havoc on the kitchen.  After snack #1, he breezily says, See ya, going out to find my friends! [heads out the door]

This bugs this shit out of me, by the way.  At some point his 10 year old self decided it was okay to tell me what he's going to do.  As if notification is all that is required.  No response from me is taken as de facto consent.  What's up with that?? Oh wait, I know...this is the ODD rearing it's ugly head.  Sometimes I forget.  He doesn't think he's actually a child, he just plays one on the television show that is our life.

So, anyway...  See ya, going out to find my friends!
Oh no you're not.  Your room is a toxic waste dump.  You're not going anywhere until it's clean.
Naturally, he decides that now it's time for snack #2.  I assure him it's not.  He responds by totally ignoring me and rummaging in the fridge some more.  Am I on mute over here??

Let's talk about cycling, shall we?  One of my old failed attempts at blogging was with a blog entitled 'Tales of a Cycling Widow.'  After a couple of posts that no one was reading, I thought, Who really wants to listen to me bitch about my husband all the time?

The Hubs is totally obsessed with cycling.  But, since he doesn't like that word, let me try to find something else that fits... Here we go: preoccupied, possessed, consumed, fixated, infatuated, hung up... Those all work equally well. 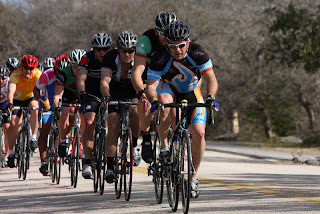 He's eager to convert the uninitiated, too.  Bring up bikes, and he'll be helping you buy one before you know it.  To him, everyone should ride a bike.  If they don't love it, it's only because they don't know what they're missing yet.

It would be his fondest joy if I were to become as enthusiastic about it as he is.  Alas, I am not, and not for lack of trying.

That old saying, "It's like riding a bike," insinuates that riding a bike is simple and something that will come easily once you've learned how to do it.  Ha.

First of all, the clothes are terrible.  Tight spandex should not be worn by the majority of the population.  Those of you that rock it, more power to you.  Those of you that have never tried it...you feel so exposed and vulnerable that you might as well be walking around naked.  When you ride in spandex, it is with the conviction that every person that sees you is either cringing at your utter gall in donning spandex or applauding the bravery required to parade yourself around in public looking like that.  Oh, and by the way, you should have a nice pair of padded spandex shorts to protect your area from the pressure of the bike seat.  Also necessary is cream to lubricate your area so as to avoid soreness from friction as your parts rub against your shorts while riding.
Read more »
Posted by Amanda at 9:20 PM 3 comments

The art of compromise

After a early but extremely filling Mexican food dinner, we settle in for some Sunday evening TV watching...

So, now we have a problem.  Let's compromise, and we both get some apple.  No one bends, no one gets an apple.  Good life lesson, right?

Me: And it's Grace, for the win!  I decided that whoever volunteered to compromise would get the color they wanted, instead.  Reward goes to the one willing to be most flexible.

Boy child was not thrilled.  He chose no apple.  Life lessons are hard, but they'll get harder later.  I'm trying to break them in early...

Friday night.  No plans.  Kids at home.  Husband is off at a decent hour.  The evening had lots of potential.  Maybe we'll go out to dinner, see a movie, run to the store, find something fun to do...

Somehow, it all went to crap.

I'm still trying to process it.

The hubs calls at 5pm, says he's headed home (this is early for him) and instead of going to ride his mountain bike alone, he's going to come home to see us.  Maybe we can all go on a family bike ride?  Sure, sounds good to me.

Mr. Sarcasm rears his ugly head.  Oh, well thanks for telling me.  I'm so glad we plan things so well.  If I'd have know that...  Blah, blah.   And just like that, I snap and do some screaming.

That blows over, and I make dinner: sea scallops on a bed of fresh baby spinach with a homemade vinaigrette, and tomatoes caprese.  Not enough food for all of us, though, so we throw some burgers on the grill, too.

It gets really ugly when I bring up the fact that the ungrateful wretches don't deserve to go swimming because their rooms and bathroom are in deplorable condition.  The girl child goes into head spinning Linda Blair mode, raging about the injustice of it all, and she somehow manages to use the fact that her room is filthy as a legitimate reason that she shouldn't have to clean it before she goes.  WTF?  Meanwhile, the boy child is busily working away on his remote control car, somehow thinking that he's going to go swimming and complete his car work, simultaneously.