Déjà vu all over again

2 days in a row...? This chick must have all kinds of free time or something.  She's been a real slacker of a blogger this summer.  Writers write.  Right??  But where has she been...?

When The Boy was in preschool, he complained of a sore foot.  He never complained to me, though.  Complaints were made where maximum reaction would be gained: Grandma.  She relayed said complaints to me, I shrugged them off, and he continued to complain only to her.  This went on for a few weeks, at which point I said with exasperation, There's nothing wrong with his foot!  He's walking, running, playing, and he never says a word to me about it!  So, he started telling me about it.  With resignation, I took him to the foot doctor.  He had a stress fracture in his foot.  He was in a boot for several weeks and then, when the boot didn't help, a full on cast for 6 weeks after that.  (I'll leave to your imagination what a cast on a 5 year old boy smells like after 6 weeks.  I still shudder at the memory.)

Well we déjà vu'd that shit all over again last week.

I don't even need to retype it, because it's almost exactly the same.  Verbatim.  Only now he's 11 and needs to STOP JUMPING OFF THINGS.  And I wasn't gonna be allowed to let it go 2 weeks.  I took him the next day.

Kablammo.  Cracked bone in the foot.  A little ankle sprain for good measure, too.

But hey, he's in a wheelchair for one of his roles in the play.  So, stage acting in a boot... No problemo.

He sure won't be doing much of this... 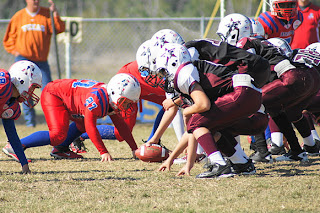 So, I went to the grocery store.  My team spirit isn't that strong.  Sorry, guys.


Injured foot during play performances AND football season... The Boy is WINNING lately.  What next?
Posted by Amanda at 5:44 PM