I'm sort of a safety nut.  I'm very serious about car seat and seat belt issues - proper installation of car seats, use of booster seats, proper wearing of seat belts in the car...  (Yeah, I don't care if your mom lets you put the should strap behind your back. When you're in my car, you're gonna wear it the right way, k?)


When the cheerleading ladies held a meeting about Cheer Competition, we were told the girls would be going to competition in a limo.  Another mom raised her hand and asked if the limo would have seat belts.  They said no, that they had asked, but since law doesn't required seatbelt use in limos, the limo wasn't equipped with them.

Now my daughter is going to hate me, because she's not riding 45 minutes away in a car full of unrestrained 4-8 year old girls, most of which shouldn't be in a car without a booster seat, much less without a seat belt.

I discussed it with her father.  He agreed with the safety issue, but thought that she should be allowed so as not to be left out.  I wasn't going to budge from my position, though.

I broke the news to her the night before the competition.  She wasn't very happy.  I had read this post the week before about a dresser falling on a 3 year old.  I told Grace the story, and I asked her what if something happened, and that were me, and what if those people were saying to me, "You could have said no to the limo."


I looked into her baby blues and said simply, "I need you here with me.  I would be too sad if something happened to you.  You can't be mad at me for that."  She grumbled and sniffled, and then she hugged me and said, "I know."  She's a pretty insightful child, and I could tell that she got it, and she wasn't mad at me.

So, we drove to the competition as a family, and we stood and waited for the rest of the girls to arrive in the limo.  She handled it with class and did not act out or seem upset in the least.  They arrived, and she greeted them and looked on in envy as they emerged from the long pink limousine.  Yes, it was pink, for the love of God.  Once they all got out, she took a peek inside.  Then it happened.

She walked over to me in outrage.  Tears were standing in her eyes.

"Mom, the limo has seat belts." 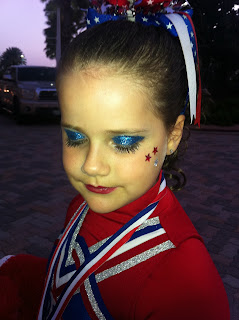