Why do we have all these animals??

I should never ask this question out loud.  I never like my husband's answer.  He likes the dogs, but he also likes to blame their existence on me.  That's fine; that just means that I don't ever get to complain about them without the requisite you're-the-one-that-wanted-them response.

I found myself asking it again last night, though.

First, let me introduce you to the dogs...

Sweetest dog you'll ever meet, seriously.  No leash necessary, ever, because she just wants to be wherever her people are. 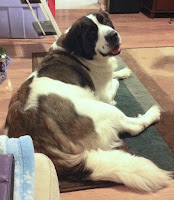 Izzie
Previously thought to be a Saint Bernard
Now suspected she may be a Pyrenean Mastiff
Age: 5
Dog years: 35 (but still acts like a big giant goofy puppy)

I refer to Izzie as "the retarded one." She means well but doesn't have the sense God gave a goat.  Leashes are extremely necessary. She's like the dog in Up... "Squirrel!"

Cute and snuggly, but for God's sake don't open the front door in his vicinity.  He's officially the girl child's dog. Leash is mandatory, and has to be crated if front door is going to be opened.

In addition, we also have 2 cats that used to live inside but were exiled to the great outdoors by the man of the house. He reached his threshold on animals when Choo Choo arrived, and rather than return the dog, we compromised on the cats.  Marriage is all about compromise, right??

So, now that you get the picture of how truly zoo-like it is around here...

Thanksgiving morning started with a 6:30am turkey alarm clock.  Once the brined turkey was roasting, the next five hours were spent making gluten free sugar free pumpkin pie, GF SF apple pie, SF sweet potatoes, a cheese ball, and SF pumpkin cream cheese fruit dip.  After all the kitchen slaving, a lovely time was had by all at our family Thanksgiving gathering at my parents's house.

We came home Thanksgiving evening to fetch a pill box.  Kids were staying at the grandparents, but boy child has maintenance meds.  We got home, and the dogs were so happy to see us after a long boring day without us.  On our return trip, we decided to let the 2 younger ones go on the ride with us (poor Belle is too old to get up into a car unless she just absolutely has to).

I carried the pill box and the tiny dog outside.  The tiny dog promptly lost his mind, flailed out of my grasp, hit the concrete with an audible thud, and took off like a shot.  Free at last!  This dog doesn't respond to his name, to the "shame" voice that works on the big dogs... nothing.  And when you follow him, he just runs faster.  It's fantastic.

So now.. it's dark out, it's almost but not quite cold, I'm exhausted from a morning of cooking and a day of eating, and I have a sinus infection.  I start to follow the dog on foot.  I'm never ever ever going to catch him.  My daughter will have a canary, but it's just not going to happen.  I follow anyway, hoping at least to keep him in sight.  He proceeds down the street and into the open garage of a neighbor.  We're friends, but I don't want to get caught lurking in their garage after dark.  That would just be weird, right?  He comes back out and continues on. He crosses a main artery of the neighborhood and heads straight for another garage.  This time, it's the home of a neighbor that openly despises me (I've mentioned before that being the HOA president is great, right?).  Well he can just get lost now, because there's no way I'm following him there.  I turn around, having decided that he'll come home when he's ready.

The little shit decides it's not fun if I'm not after him, apparently, because he turns around and catches up to me, being careful to make a wide detour around me so that I can't actually reach him, gets in front of me, and starts to run gleefully away from me again.  Now he's totally just screwing with me.

Thankfully, another neighbor comes out of her house.  She sees him and bends down to pick him up.  She knows him, since girl child has had him down at her house on a leash to play with her younger sister.  I hear, "Choo Choo, what are you doing here?"  I answer, "Running from me.  I've been trying to catch him."  She hands him to me and says, "Oh, well all you have to do is call him, and he comes."

Really?  Thanks, I didn't try that.

I attempt to thank her without sarcasm in my voice.  This is the moment that the husband decides to show up in his truck to help with the capture efforts.  I open the camper on the back of his truck, throw the escaped convict back in jail, and close the camper with force.  It's really too bad that my head was still in the way. Add "self inflicted concussion" to the list of the evening's fun activities.

We successfully deliver the meds to the grandparents and return home.  How I wish I could enjoy a glass of wine, but the blasted sinus infection takes all the joy out of wine, sadly.

We realize there's a cat in the house.  Grand. The kids let the cats in this morning and left them in all day without a litter box.  I look around and am thankful my bedroom door was closed.  I don't see any messes to tend to.  Then, I notice the dogs are a bit too interested in something at the girl child's bedroom door, which is also closed.  I enter, and I see a cat lazing on her bed a split second before the smell of cat feces hits me in the face.  The cat has chosen a pile of interesting things (clothes, books, etc.) to crap on, rather than just the bare floor.

So, my evening wasn't actually complete until I cleaned up cat mess, too.  If I had been less tired, I would have returned yet again to my parents' house, retrieved the girl child, and made her clean it up.  It was more than I could manage, though.