Having a voice amidst the Christian cacophony

Apparently this is offensive.

Is it the word penis?  Unless you're a nun or a female minor with no male siblings and no father to accidentally walk in on in the bathroom, chances are pretty good that you've seen one.  If you're male, you have one.  If you're female, your father/brother/husband/son has one that you have mostly likely seen at some point.  My 8 year old daughter knows what a penis is and knows how to use it in a sentence without any qualms.  (Cole, you just went to the bathroom and probably touched your penis. Wash your hands before you eat.  True story.)

Okay, so...since a penis was involved in the creation of just about everyone in one way or another, certainly we can't be offended by the word penis.  Granted, the above statement does mention whipping it out in public and waving it around, but it's prefaced by the words please don't.  So that's okay, right?

Maybe it's the comparison of religion to a penis.  But then that only works if you attach negative connotations to the idea of a penis.  Not me.  I happen to have a certain fondness for them.  The idea of a penis evokes acts of pleasure, acts of love, and acts of creation.  I think the world would be a sad place without penises.

I also happen to have a certain fondness for religion.  All of them.  Spirituality in general fascinates me.  I know God, and I even think Jesus was a pretty cool guy.  But...


I am not a Christian.

Nope.  I was baptized and confirmed as a Catholic, but I've never held much interest in the teachings of the Church.  It is my belief that more truth about God can be found in the movie Avatar than in any given modern Christian church service.  I would bet, though, that if I started preaching the gospel according to Avatar, some people would get offended.

What if I said that I think that every one of you who thinks hell exists with a capital H and is a place that God will send you if you displease Her are totally mistaken in your understanding of the divine?  Would that offend you?

You see, I have some less-than-mainstream views about God and religion, and I am part of the minority.

My favorite color is purple.  I adore purple.  I can't imagine anyone liking any other color more than purple.  It's truly the most spectacular color in the spectrum.  It just makes me feel good.  If you like blue, though... well, that's okay.  If blue makes you feel good, then that makes me happy, too.  I can celebrate blue with you without feeling like I made the wrong choice when I chose purple as my favorite color.  I can have a blue themed celebration and then return to my purple passion.  Both of the colors exist on the spectrum, and both are relevant and necessary.  I just gravitate to one while you gravitate to another.

So... What if I want to celebrate the Season just as a special time that has been celebrated by many different religions across time?  What if it's not about the birth of your Christ for me?  People have been celebrating this holiday for as far back as anyone can remember.  The Christians call it Christmas now, but that's just another name for a much older celebration.

Pagans cut down trees to symbolize the death and rebirth as a tree of one of their gods.  They were doing it long before Jesus entered the picture.  So, you call it a Christmas tree if you want.  If you're Christian and you have a tree up in your house, it is a Christmas tree. But don't get offended because everyone else doesn't want it to be a Christmas tree.  Don't preach on your facebook wall about all the evil people that are trying to kill Christmas and replace it with the word holiday.

I love words.  As a word lover, I know that holiday is a word that means holy day.  And how can that offend you?

Using the word holiday is meant to be inclusive of everyone's beliefs.  The term is not meant to be exclusive, to take Jesus out of Christmas; it's used as a gentle remind that Jesus isn't the only reason for the Season.  Lets celebrate all the reasons that this time of year is held dear, all the reasons to find joy and magic in this winter celebration.

That brings me back to my original topic.  If the above image offends you, think about why it's offensive.  There's nothing wrong with penises.  I love them!  However... they can be turned into awful weapons of violence when they're forced on others without their consent.  There's also nothing wrong with religion.  I love it, too!  But religion can also be turned into an awful weapon of violence when religion, and religious intolerance, is forced on others without their consent.

The statement may be challenging and evocative, but the comparison is valid;  have it, love it, but don't try to force it on anyone else.  That's when it becomes offensive. 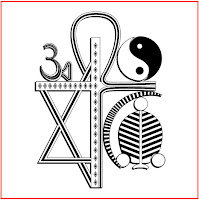