The art of cursing: a parenting experiment

I'm climbing way down off my high horse after the previous post.  Yes, panties got twisted about it.  I knew they would.  And yet, the truth shall set you free (even though it will piss you off first, remember?), and I will speak my truth.  So, anyway...for now, lets move on to a more compelling topic.  Be prepared to judge me, but try to maintain an open mind and hear me out...

A few months ago, I was asked a question by my children that I did not know how to answer.

Mom, how come poop is okay to say, crap is okay but not very polite, and the S word is a bad word and not okay to say?  They all mean the same thing, right?


Well... Yes.  They do.  As someone who is not easily offended by profanity, I was briefly stumped.

When The Boy was a toddler, if you asked him why, and he didn't know the answer, his answer was always:  Because yeah.  Without further explanation from his 3 year old self, we interpreted his answer to mean: Because it is what it is.  No need to question the universe further.  That's just the way it is.  It became a commonly used phrase in our household.  It's a very useful term.

So, as the kids posed this question to me, the only immediate answer I could think of was... Because yeah.  That's just the way it is, folks.  I thought about talking about societal norms and connotation and other things, but the more I pondered the question, the more thoughtful I became on the subject.

Words are just words until we give them power.  In making certain words more powerful by prohibiting them, we're creating an environment in which it becomes more compelling to use those taboo words.

I remember middle school, though not fondly. The curses start flowing freely about that time as these young ones begin to explore their individuality and try to separate themselves from childhood and its restrictions.  Being the mother of a middle schooler, I could do my best to muzzle his mouth when he's around me, enforcing rules on appropriate language usage, and then cringe to imagine what he's saying when I'm not around.  Because make no mistake; he will be saying things.

I couldn't help but make the leap of thought from this subject to another important subject that looms on the parenting horizon: sex.  My studies in maternal and child health have more than adequately illustrated the futility of abstinence-only sex education.  Telling them simply not to do something is rarely the answer.

Perpetuating the rule against childhood cursing seemed, to me, akin to teaching abstinence to teenagers: a good idea, in theory, but counterproductive in practice.  I came to the conclusion that teaching acceptable boundaries when cursing would be far more beneficial than teaching them to keep their mouths shut (until they're behind my back, of course).

I've been known to utter expletives from time to time.  I even have a certain fondness for a few choice words.  However, there is an art to profanity.  A well placed curse can highlight or clarify a point, convey a strong emotion, or provide a little levity.  Indiscriminate cursing is a different story, though; it shows a lack of imagination and self control, and it conveys a sense of low intelligence.  I realized that, as a parent, I have the opportunity to provide some guidance if I can keep an open mind and think outside the box on this issue.

Thus, I lifted the ban on "bad" language.  The rules were these:

1) Say what you want to say at home.  I'll let you know when you cross a line.
2) Follow the laws of the land when you're away from home.  Cursing will still buy you trouble elsewhere, and saying 'My mama lets me' will not be a valid defense... not at school, and certainly not with your grandparents, aunts and uncles, or other kids' parents. 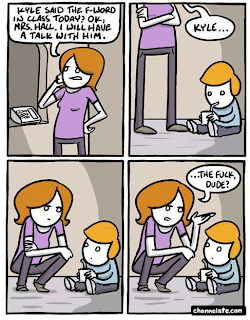 Before you shake your head in disgust, bear with me for a few more minutes.  I know what you're thinking:  It's a respect issue.  Right?  It's disrespectful for children to curse around adults.  Only if the adult finds it offensive, though.

As adults, we have to use our best judgment when it comes to cursing.  We have free will and the right to free speech.  Still, we must learn when to moderate ourselves.  Sure, there are some of us that choose not to curse at all.  For the rest of us, though, we use situational awareness, judgment, and common sense to know when it's okay to drop an F bomb and when it's not.  We may or may not work in an environment where a few curse words are acceptable or overlooked.  We don't go around cursing at store clerks or bank tellers, at police officers or our kids' teachers.  (Well, okay, some do.)  As a whole, though, cursing as an adult is acceptable, but there is a time and a place.

That's what I'm endeavoring to teach them.  It is an exercise in good judgment.  If one of them says  dammit when they smash their elbow into a wall, I couldn't care less.  If they tell me to fuck off, we're gonna have a problem.  If name calling ensues, we're going to have a discussion about respect.  If they want to sing along to one of my new favorite songs, F**king Perfect, by P!nk... sing it.  The message of the song far outweighs the concern over word usage.  True to my word, they don't get in trouble if they cross a line; they get a warning from me that indicates it was too much.  Dial it back.  Inappropriate to say to your Mom.  Consider your audience.  This is the kind of feedback I provide.  If it were to continue beyond my mild reproach, then I would consider consequences.  Surprisingly, though... it doesn't.  They take my advice to heart.  They strive to understand their boundaries and stay within them.

Because The Boy is a middle schooler, he naturally pushes the envelope further.  The Girl is less interested.  She does like to belt out some P!nk, but she prefers not to use "bad" words.  He likes to let out a string of curse words just to see if he can.  It makes me cringe sometimes, to be honest.  It's not anything risqué though; there's a certain earnestness to it.  I can tell that he's just trying to shake the role of child and be more grown up.

My heart twinges with empathy for him.  I cannot let him make most of the decisions he wants to make.  I'm still in charge of what he does, where he goes, what he wears to school, what he eats... none of that can be up to him yet, even though he wants so badly to assert some control over his world.  I can give him words, though.  I can let him explore the power of words and the consequences of his own choices when it comes to words.  I can give him that much trust and responsibility.  After all, I'm going to be to trusting him behind the wheel of a car in a few short years, right?  We've gotta start somewhere...
Posted by Amanda at 10:53 PM